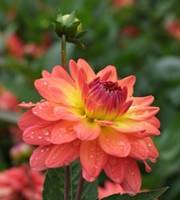 Plants and animals in Thailand are both unique and diverse. Thailand’s geography, which stretches from the coasts of the Malaysian Peninsula to the mountains of mainland Asia, features a variety of climates and thus a diversity of plant and animal species.

Despite a majority of Thailand having been converted to agriculture over the centuries, natural forest still covers roughly 25% of Thailand’s area. Thailand’s woodlands mostly consist of monsoon forest and rainforest, which are differentiated by the amount of rainfall each receives. Furthermore, monsoon forests typically consist of deciduous or hardwood trees, which shed their leaves during the dry season in order to conserve water. Thailand’s most useful hardwood is the teak.

The rainforest zones are mostly covered with evergreen trees, although much of Thailand has considerable overlap and it is not uncommon to find bamboo, coconut palms, and banana trees throughout the country. Across the in the coastal lowlands, in addition to more predominately rainforest cover, mangroves and rattan abound.

In addition to the aforementioned Teak, Thailand is famous for its variety of fruit and flower-bearing trees and plants, the most iconic of which is the orchid, Thailand’s national flower, which appears in over 27,000 different varieties.

While encroachment on their habitat has reduced the populations of many exotic animals in Thailand, there are still a great variety of indigenous species. The most iconic of these is the Elephant, of which roughly 1,000 remain in the wild, mostly within the National Parks in Thailand. Among the larger mammals are the tiger, leopard, Malaysian sun bear, sambar deer, otter, and civet cat. Climbing animals include the gibbon and many species of monkeys. There are also sheep, goats, oxen, tapirs, wild cattle, wild hogs, and a wide variety of snakes, including cobra. Crocodiles, lizards, and turtles are also very numerous and fish abound in the rivers and coastal waters.

Finally, there are over 900 breeding bird species indigenous to or that migrate to Thailand. Bird-watching tours are particularly popular in Sam Roi Yot National Park and Khao Sok, which is home to six species of hornbill.