This white sandy beach fronts a shallow lagoon between rocky headlands. Conditions for swimming, windsurfing, sailing and sunbathing are all excellent.

The palm-fringed beach is best known for its village of “Sea Gypsies”, formerly a nomadic fishing minority believed to be of Melanesian descent. 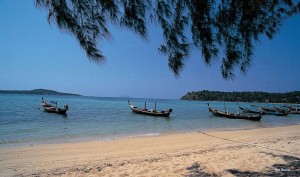 Phuket’s most developed beach offers numerous leisure, sporting, shopping and recreational options along its 3 km. crescent bay. In addition to its daytime attractions, Patong is also known for its vibrant nightlife among which seafood restaurants prominently feature. 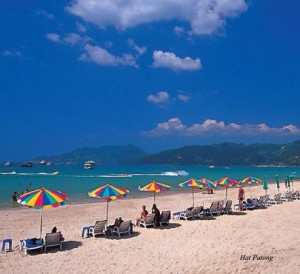 A location popular for its several restaurants serving some of Phuket’s best seafood.

The southern tip of the cape is the location of the Marine Biological Research Centre and Phuket’s Aquarium, where visitors can see several hundred exotic and colourful marine species.

The small island separated from the mainland only by the Tha Chin Canal, is located 4 km. northeast of the town. There is a sea gypsy village considered the largest in Phuket.

The park, located near Phuket International Airport along Routes No. 402 and 4026, some 30 km., occupies a total area of 90 square kilometres and has an uninterrupted 13 km. long stretch of beaches: Hat Nai Thon, Hat Nai Yang, Hat Mai Khao and Hat Sai Kaeo.